We’ve had our first day in the saddle! 65km from Lille, France to Ronse, Belgium. Crossing the first country border felt like a giant leap forward. We mostly rode along the Eurovelo 5 route which follows the canal. The way is flat and relatively easy but it was my first time feeling the bike so heavy and it felt like a difficult push even on a river basin. People in general have been incredibly friendly, coming over to say ‘Bonjour’ and ask us where we are headed with so much stuff. 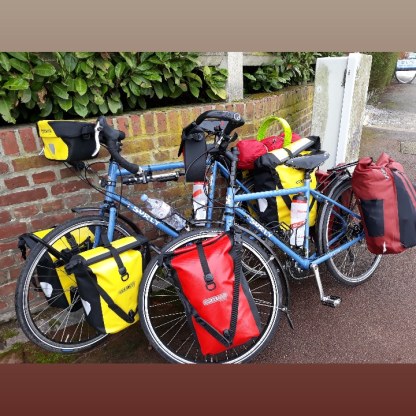 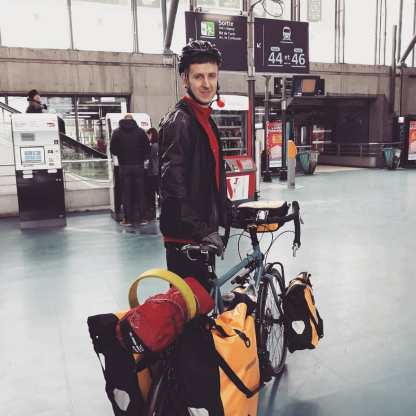 I keep thinking about physical things I have left behind and as quickly not caring. I haven’t straightened my hair, I haven’t really even changed clothes (yes I know it is only day 2) but that already feels like I’m quickly letting go.

As per any bike trip that we have taken so far, we planned it totally wrong. We forgot the Eurostar confirmation for our bikes. We managed to get lost, even with our new state of the art GPS tracker. It was Easter Monday so absolutely everything in France and Belgium was closed (funnily enough it is now Tuesday and we were told that Tuesday is also a day of rest in Belgium so there hasn’t been much open today either) and we didn’t pack any food. We couldn’t use our new touring stove (again state of the art) because we didn’t pack paraffin. Thank goodness McDonalds, as it still keeps its American standards no matter where you are in the world, was not closed and we managed to eat our first lunch and dinner there. We realised we obviously packed way too much and have already started ditching stuff, away has went our expensive foldable chairs saving the bikes around 4 kilos.

Relaxing now in Ronse, Belgium I am realising how perfect this way of travelling is. I have been to Belgium several times staying in Brussels and Bruge, but as with any big cities you don’t really get to know a culture until you ditch the tourist areas and go to the small towns.

We are spending the next couple of days chilling and enjoying Belgium life, which basically means eating nice bread, drinking very nice beer and wandering through cathedrals (at least that is what I hope it means!) looking forward to exploring more in this country. 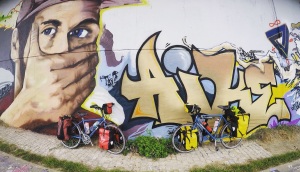