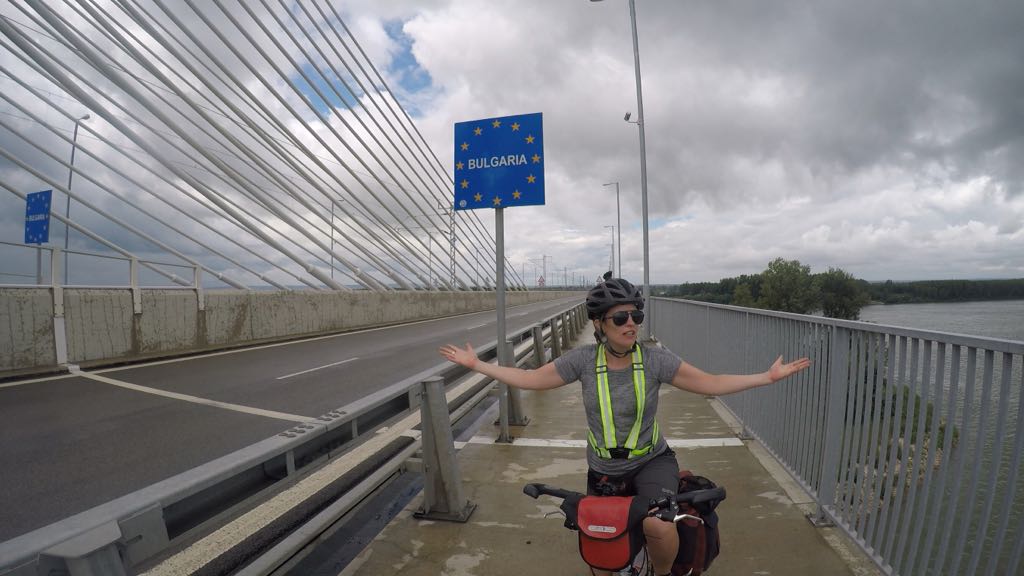 With the end of this journey looming and the prospect of family coming to meet us In Istanbul, we concluded we wanted to take the most direct route to Istanbul over the Balkan Mountains. We started mapping our route without our trusted Eurovelo map and only an idea of what roads others had used previously when going to Turkey this way.
Serbia had been an experience and now we were ready to enter Bulgaria, finishing our journey on the Danube and heading into the mountains from Oryhavo. Cycle touring mates we had met on the journey informed us that we could get to Oryhavo quicker, and with less hills, by taking the road on the Romanian side of the Danube. Having heard from many along our journey about the dangers of Romania, including the wild dogs and the potential of being robbed, I was understandably a bit dubious about the journey.

We planned to ride 100km in one day from the Bulgarian border to the Romanian border where we would cross back into Bulgaria with a ferry. 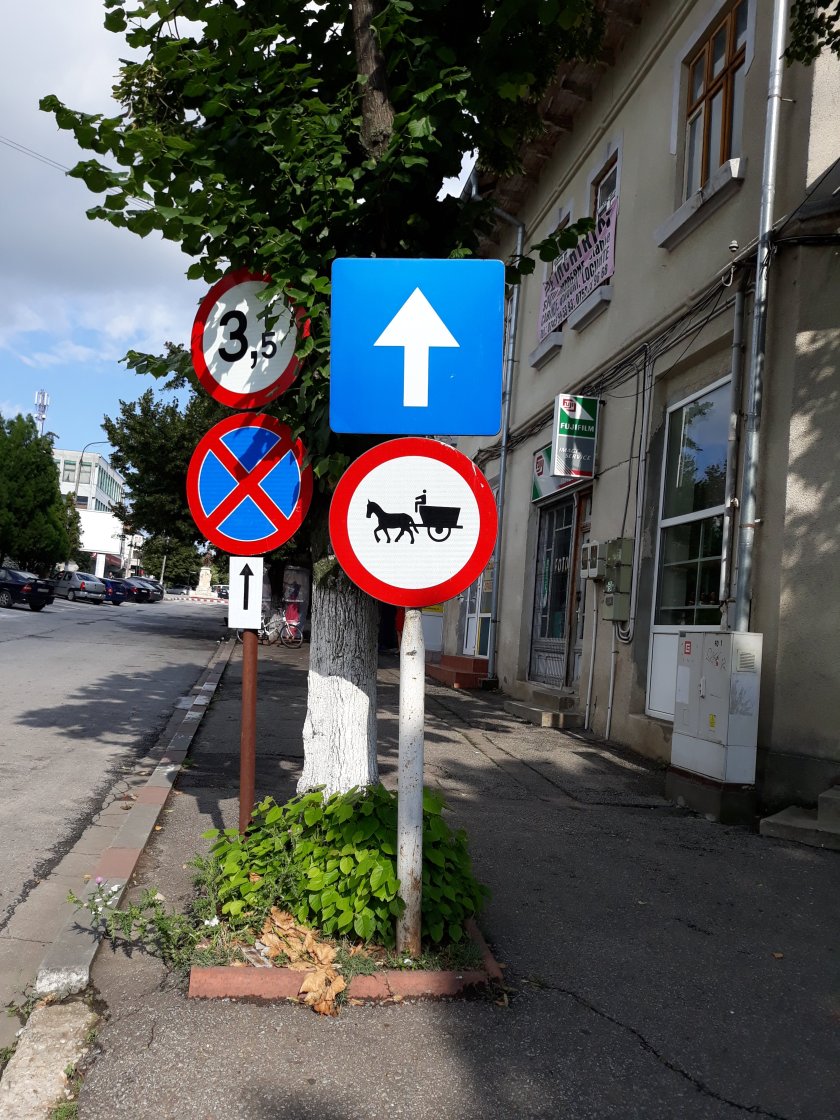 We woke up early and were excited to see horse and cart road warning signs in front of us and we didn’t have to wait long to see the horse and carts in person (for a while there were more of them than cars on the road). It was a delightful change from the racing drivers of Serbia with the much more pleasing sounds of clip clopping along the roads as opposed to revving engines.

The journey through Romania was refreshing, the towns, although obviously poor, were welcoming and friendly. Children ran up to the bikes to give us high fives and most of the people along the roads and driving by waved hello. My partner was challenged to races with young boys who were also on bicycles. There were a couple of dog chases which, in reality, were more startling than terrifying. I kept my speed on the bike and stared at the dogs hard until they tired out and gave up the chase. This approach seemed to work fine for us.

We wound up really enjoying our day in Romania. We concluded our time there with a beautiful evening, a cold beer, some very different Romanian food, (curried chicken, polenta and a fried egg) England’s last contentious game in the world cup and a chat with our friend, the rotund cycle tourer, who happened to be spending his evening at the same motel.

Relatively disappointed to leave Romania we looked towards Bulgaria and the mountains that would be the final challenge of this stage of our journey.

I have to admit I didn’t enjoy our time in Bulgaria. We were able to ride through the country in only 7 days (with one day of rest), and unfortunately I found every day of those 7 days difficult. Admittedly I did work on our rest day and I probably should have taken the time for my body and mind to heal, but whatever it was I couldn’t bring myself to get past the pain of cycling and actually enjoy the jouney and the culture. I was disappointed because I had really looked forward to Bulgaria since two of my best friends in college were Bulgarian and when we got our first room in London we shared the house with a few Bulgarians who were some of the nicest people I have ever met.

True to my stereotype, the Bulgarian people were warmer than any we had met in a long time. The towns we visited were relatively charming and the food and accommodation had definitely improved since Romania and Serbia. There was a definite feeling of ‘up and coming’ in Bulgaria. You could instantly tell that this was a country that was modernising and changing quickly.

We needed to ride major roads to make it through the mountains efficiently and I can say pretty confidently that ‘Those roads are not meant for bicycles’! There were no hard shoulders to escape onto and even on dual lane roads the drivers chose to drive as close to you as possible and not take up a position in the other lane, as would seem sensible. We road in line as close to each other as possible with as much high vis gear and as many twinkling lights as we could manage to put on. My partner even attempted swaying into the road behind me with the intention of making drivers more aware of our presence, but nothing seemed to help. It often felt like we were sitting ducks waiting to be picked off and we would entertain ourselves on every ride by counting down the miles until we managed to leave one major road for another. 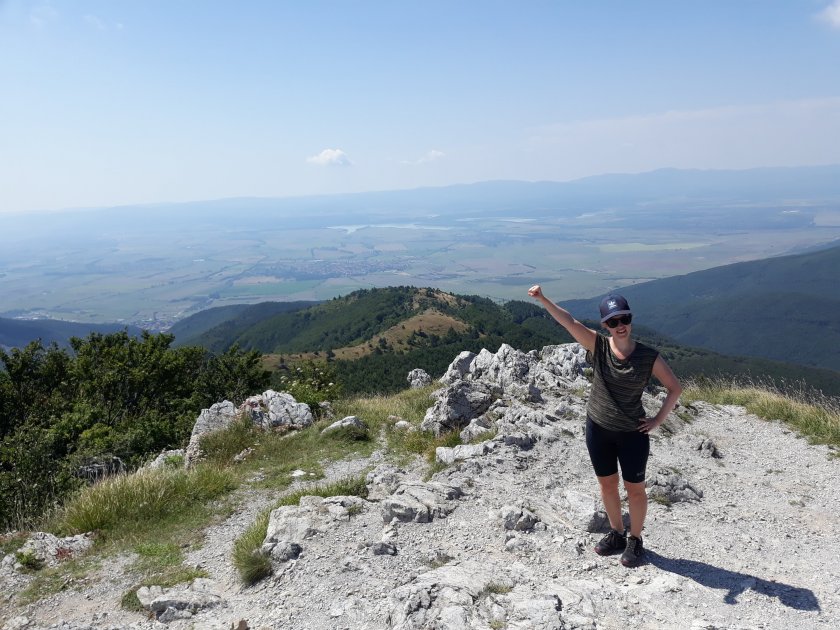 We hadn’t stayed with a Warmshowers host since Germany and it had gotten to a point where we missed the opportunity to get to know a place through the people that lived there. My partner booked us a host for the evening after our hardest climb in the Balkans. Shipka Pass is a 14 mile climb up a twisting road with an average 6-7% gradient. Lucky for us the traffic was actually not that bad, and relatively slow moving. With my partner happily taking in the views and enjoying the mountain breeze, I was pedalling hard and trying to focus on the climb. After 1200 meters we did make it and then we walked the last obligatory stairs to see the war monument and views, which were breathtaking. Unfortunately however the conclusion of the ride was weighing on my mind, I was petrified of the tight turns at steep gradients that I knew were awaiting us. Like a grandma on a bike I did come down the slope at minimum speed, however as soon as we made it over the mountain the heavens opened. We arrived to our Warmshowers host exhausted and soaked through.

Like all of our previous hosts, the Bulgarian family was welcoming and accommodating. We passed out in his unfinished upstairs apartment after the ride and woke up famished and bleary eyed. We had dinner with the family and discussed what sounded like fantastic mountain bike trails around the country. He wasn’t surprised, and actually agreed with us, about Bulgarian drivers and roads. We had hoped he would be able to help us alter our route so that we could continue on quieter roads but unfortunately he generally agreed with the routes we had mapped and we knew there would be a few more days of pain in store for us.

I was exhausted and deflated by my experience in Bulgaria. Since Begrade we had been riding hard with only a few rest days. We were climbing more than we had since the Black Forest and we were following our own route on busy, scary roads. I felt at saturation point with the bike touring and I knew the only cure for this feeling was the experience of entering an entirely new culture and finally seeing the sea.

Again we got up very early on our last day in Bulgaria and road as quickly as we could to the Greek border, we road for 35kms through the rolling hills of Greece until we finally came to our last border crossing on this part of our journey. With tears of joy brimming in our eyes we entered Turkey and knew we would soon swim in the ocean.